During college, I spent one winter vacation working construction for my step-father. My most vivid memory of that month is my step-father racing across the top of a cinderblock wall, with only the concrete floor, twenty feet below on either side, as a safety-net.

I do not like heights, mainly because I can’t stop my psychoses-ridden mind from detailing the vivid side-effects of extreme heights. My son does not share this apprehension.

Last Friday, after work, Ian and I went to the City Museum, which has to be my favoritest place on earth. I’ve written about it before; a welded tangle of planes, cranes, and rusty, twisted iron.

Yes, planes. Two, actually. The City Museum boasts two Saber 40 fuselages, which have been stripped and strapped to steel towers. Neat! This was the first time Ian’s been able to climb well enough to reach them. Ian spends the majority of his life doing as he’s told, so of course I planned to follow where he led. Straight to the planes.

I should’ve known what was coming when he chose the most difficult climb to the top.

There’s a spiral staircase rising to the platform of the first plane, but there’s also a cramped, wonky alternate route – somehow appropriate for my son – which follows a series of small, iron plates up and through the center of a cage. The plates aren’t level, so it feels as though you’re constantly slipping. Neat!

‘Where are we going?’

So he climbed, and grunted, and shoved his way to the top. Bear in mind, Ian’s been fairly hesitant about climbing recently; complaining that he can’t, whining, pleading for help. I’d be more sympathetic, but the McDonald’s PlayPlace ain’t Mt. Everest. But that day he didn’t ask for help unless he really, desperately, daddy-heart-attackedly needed it. He just grabbed whatever he could, and pulled.

We reached the first plane, and Ian made a bee-line for the cockpit. The plane doesn’t have much, but all of the cockpit’s controls are still in place. Buttons that click, switches that flick, pedals that sway. After a few dive-bombs and loops, Ian wanted to head to the next plane.

The City Museum is all about convenience, and you can climb from one plane to the other. Leading from the cockpit window of the lower plane to the wingtip of the upper plane is a ‘wrought-iron slinky’. Even though this route was his idea, I wasn’t sure Ian was up for it. So I encouraged.

‘Ian, hurry! We have to rescue the people in the next plane!’

‘Okay! Don’t worry! We’re coming! Hold on!’ And up he went, climbing pinky-width spirals of wire with gaps large enough for his leg. My eyes were wide, and my mouth was ajar. Very ajar.

Another point of the City Museum is that it never really ends. You just keep climbing and walking and crouching, choosing left or right or up or down. It’s all about prepositions. After several more rescue missions – during one of which the plane exploded – we made our way to the opposite wing, which is joined to the side of the museum by another, longer slinky.

And herein lay my problem.

I’m terrible with distances, but the gap between the plane and the museum is at least a mile wide. Maybe two. Well, at least a hundred feet. The planes are the highest point of the museum, a few stories up. And beneath this mile-wide, mile-high tube of whisper-thin metal strands is…nothing. Nada. Bupkis. No towers, no pillars, no pile of big, fluffy pillows. Just a lot of air, followed by a lot of metal. 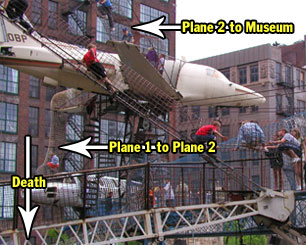 Unfortunately, I didn’t notice this until Ian and I were halfway through. Like all men, he moves without thinking, so I was doing my best to make sure he was stepping in the right places, holding on, maintaining his balance. Really, we were having a blast. Then I looked up.

I noticed that, apart from its ends, our slinky tunnel was supported only by a thumb-thick wire welded to two cross-pieces, the wire itself being supported by yet another wire running from the main building to somewhere in the depths of tetanus-wielding fun. Then I looked down. I shouldn’t have looked down. It’s in all the movies. Don’t. Look. Down.

And suddenly Ian became my guide and inspiration. When I talked to him I was talking to myself (‘You can’t fall. Just hold on. You’re such a big boy!’), and his hand holding mine was my hand holding his. Fathers can’t freak out. We’re not allowed. Daddy is strong and brave, and knows what he’s doing. If Daddy can do this, so can I.

I was thankful that Ian couldn’t see my face.

Suddenly we were on the other side, me having to lower Ian the last few feet. He started to move on, but I hadn’t finished climbing down yet.

I dropped, and squatted by his side. I was so proud. We hugged, we cheered, we high-fived.

Ian is well on his way to a shining career in welding or tight-rope walking. I’m happy enough behind a desk.